Currently the oil price is around $80 per barrel.

In the past, whenever there is a fall in crude oil prices, Organization of Petroleum Exporting Countries (OPEC) led by Saudi Arabia used to cut production to ensure that supply fell and the respective prices were maintained. This time it did not happen. For some reason Saudi says “ We do not seek to politicize oil…for us, it’s a question of supply and demand, it’s purely business.” But one can easily see that the actual reason being that US and Canada has seen an increase in Shale oil production in their countries. (Shale oil – A substitute for traditional crude oil, one can comfortably use for power generation etc. ) This boom has led to the United States and Canada producing much more oil than they were a few years back. However, the production of Shale oil is very expensive and it is economically reasonable for US and Canadian oil companies to produce Shale oil only if the crude oil price is between $50 and $75 per barrel. Hence, by ensuring low oil prices the Saudis wants to ‘kill’ the shale oil producing companies in Canada and United States. 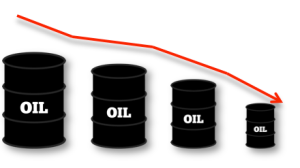 The Saudi’s strategy is already working. It seems The International Energy Agency (IEA) has said that the investment in shale oil fields will fall by 10% next year, if oil prices continue to remain at $80 per barrel.

On a positive side, for countries like India, it is evident that fall in oil prices it is beneficial. Calculations say that, a $20-per-barrel drop in oil prices transfers $6-700 billion from oil producing nations to consumers worldwide or nearly 1% of world GDP. Falling oil prices are also benefiting the airline and shipping industries, where fuel is their biggest expense.

On the other side of the world, the countries that may get into trouble if the prices continue to stay low are mainly Russia and Iran. Russia and Iran relies heavily on exports of oil and gas. Saudi is giving a tough competition. Again the stats show that Russia and Iran compete with Saudi Arabia in the international oil market, and both need oil prices to be roughly $110 a barrel in order to balance their budgets.

– Analyzed from articles in firstbiz website, IndianExpress and The Economic Times

One thought on “When oil price falls”